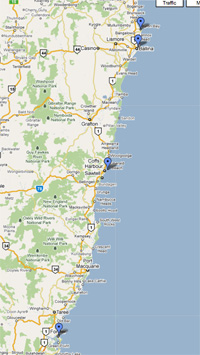 I’m a road tripper. I was raised watching a couple of blokes cruising around Australia in a Land Rover and couldn’t wait to do that. When I was 12, my family set out on a road trip around Australia and after 3 and a bit months, we returned and I wanted to do it again the next week.

When I first got my drivers license I drove my mates up the NSW north coast and back…just because. So I think every year since then, I’ve managed 2 or 3 solid roadies a year, up and down, side to side, into the middle and back. The I went to the States and did it there and have traversed the country some 6 times with additional jaunts into both Canada and Mexico since arriving some 14 years ago. I really don’t care who I go with (unless they are really annoying and I mean really annoying) or where I go but most of the latter ones have been with my long-suffering-not-overly-enthusiastic-about-boring-road-trips wife who is far more interested in getting there than the journey to there. I am often left to my own devices in the car while she catches up on some sleep which also gives me a chance to rock along to a few tunes that are not necessarily her favorites – the soundtrack being an especially important element to a good roadie. I’ll take this opportunity to share with you a classic road trip tune which will no doubt be unfamiliar to anyone outside of Oz and that’s Cold Chisel. This is Bow River.

While Chisel weren’t my favourite favourites, they were up there and always remind me of home.

So I finally talked the missus into a week road trip up to Byron Bay last week which is most certainly one of my all time top spots in the world and I had a mate living up there plus a couple of other mates flying up to join us. Plus, this would be my 3 year-old’s first road trip (yes that means I haven’t been on a roadie for at least 3 years) so it was time for his official initiation and what better than a North Coast tour.

While I know a road trip is not for everyone, for me, it offers a lot of benefits.

The Cleanse – I think this is more and more relevant and I’m not sure about you guys, but most folks I know and myself included, have so many things going on that it’s really tough to switch off. I used to be a genius at it but now I suck. The ‘always on’ mentality really has become problematic for a lot of folks and while I’ve decided to try and battle against it a bit, I don’t think it’s really an option (I appreciate the fact that it allows me to work from home) but I’m aiming towards a better work/life balance. So I’m on a road trip, I do have my blackberry but connection is spotty and interruptions are minimal (somehow Ernie is the only one who can figure out how to reach me).

The Perspective – When you stare at a computer screen 8+ hours a day and also some weekends, one does end up with a big ugly set of blinders. When I come home and talk with my mates, they wonder what I’m talking about with the tweets and the SEO and the Adwords which reminds me that there is life outside of Internet Marketing. Then when you take a road trip and you talk to someone and they don’t even have a mobile phone, you’re reminded even more that there is still a brave new world of reluctant tech adopters. So I’ve found a little bit of clarity.

The Resolve – With all this time out on the open road, you get a unique opportunity to really think. Sometimes that might not be a good thing;) but in general, with all this new perspective you’ve got some new ideas to work through. I’ve personally been looking to shake things up for a while now and had made a decision to make a move professionally and this decision has been solidified following my recent roadie.